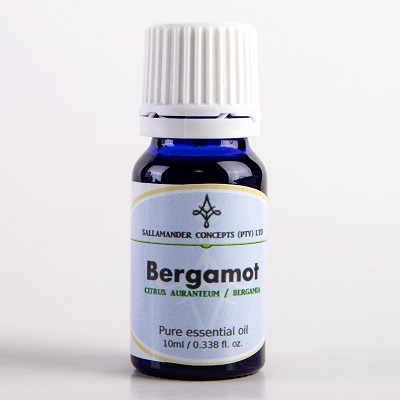 Bergamot essential oil can be used in the treatment of depression, stress, tension, fear, hysteria, infection (all types including skin), anorexia, psoriasis, eczema and general convalescence.

Bergamot essential oil is extracted from the tree Citrus aurantium var. bergamia (also known as C. bergamia), of the Rutaceae family and is also known as Bergamot orange.  Fresh smelling Bergamot essential oil is a favorite in aromatherapy and is great for creating a more relaxed and happy feeling, relieving urinary tract infections, boosting the liver, spleen and stomach, while fighting oily skin, acne, psoriasis, eczema, as well as cold sores.

The scent of the oil is basically citrus, yet fruity and sweet, with a warm spicy floral quality and is reminiscent of neroli as well as lavender oil. The color ranges from green to greenish-yellow and the oil has a watery viscosity.

This tree is native to South East Asia, but was introduced to Europe, and particularly Italy and is also found in the Ivory Coast, Morocco, Tunisia and Algeria. Bergamot oil is made from a tree that can grow up to four meters high, with star-shaped flowers and smooth leaves, bearing citrus fruit resembling a cross between an orange and a grapefruit, but in a pear-shape. The fruit ripens from green to yellow. The oil is one of the most widely used in the perfumery and toiletry industry and forms, together with neroli and lavender, the main ingredient for the classical 4711 Eau-de-cologne fragrance. It is used to flavor Earl Grey tea. The name is derived from the city Bergamo in Lombardy, Italy, where the oil was first sold.

The rind of both ripe and unripe fruit is used to extract the oil by expression, which yields about 0.5 %.

When you are looking for an oil to help with depression, SAD (Seasonal Affected Disorder) or generally feeling just a bit off, lacking in self-confidence or feeling shy, then consider bergamot oil. It also has superb antiseptic qualities that are useful for skin complaints, such as acne, oily skin conditions, eczema and psoriasis and can also be used on cold sores, chicken pox and wounds. It has a powerful effect on stimulating the liver, stomach and spleen and has a superb antiseptic effect on urinary tract infections and inflammations such as cystitis.

Bergamot essential oil can cause burns when used on a sensitive skin which is then exposed to sunlight, as the high content of bergaptene can cause photo-toxicity. It is advisable to keep out of the sun if this oil is used on the skin. Even when the ingredient Bergaptene (Furocoumarin) is removed from the oil and photo toxicity is therefore minimized, it is still advisable to keep treated skin out of the sun, and to use it in concentrations of less than 1 %.

Bergamot essential oil can be used in the treatment of depression, stress, tension, fear, hysteria, infection (all types, including skin), anorexia, psoriasis, eczema and general convalescence.

In vapor therapy, bergamot oil can be used for depression, feeling fed-up, respiratory problems, colds and flu, PMS and SAD.

Blended Massage Oil and in the Bath

It can be used in a blended massage oil, or diluted in a bath to assist with stress, tension, SAD, PMS, skin problems, compulsive eating, postnatal depression, colds and flu, anxiety, depression, feeling fed-up and anorexia nervosa.

Blended in Base Cream

As a constituent in a blended base cream, bergamot oil can be used for wounds and cuts, psoriasis, oily skin, scabies, eczema, acne, cold sores as well as chicken pox.