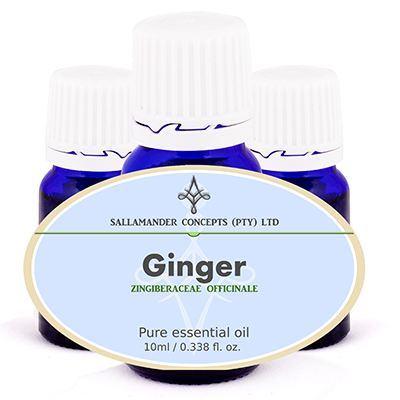 Ginger essential oil is extracted from the plant Zingiberaceae officinale of the Zingiberaceae family and is also known as Common or Jamaica Ginger.

Ginger Essential Oil’s warming properties are often used for digestive problems, as well as nausea – be that morning sickness or travel upset. It is also of value when treating colds and flu and especially for catarrh lung conditions and rheumatic pain. It can also be used on the skin to help clear bruises.

Ginger oil can vary in color from pale yellow to a darker amber color and the viscosity also ranges from medium to watery. It is a strong smelling oil – spicy, sharp, warm and with a hint of lemon and pepper, which smells of actual ginger.

The plant is said to originate from India, China and Java, yet is also native to Africa and the West Indies. It was most likely brought to Europe between the 10th and 15th century as a condiment and spice.

Ginger is a perennial herb and grows to about 3 – 4 feet high with a thick spreading tuberous rhizome. Every year it shoots up a stalk with narrow spear-shaped leaves, as well as white or yellow flowers growing directly from the root.

It has been used as a medicine since very early times and is recorded in both Sanskrit and Chinese texts and is also mentioned in the literature of the ancient Greeks, Romans, and Arabians.

Asian medicine uses dried ginger for stomach problems such as stomach-ache, diarrhea, and nausea. The Chinese also use it to boost the heart and to help with mucus and phlegm.

The name ginger is said to be derived from the Gingi district in India, where tea made from ginger is used for stomach upsets.

The oil is extracted by means of steam distillation from the unpeeled or dried, ground-up root (rhizome) of the plant, and can yield about 2 – 4 % oil.

Ginger essential oil is well suited to help ease colds and flu, nausea, motion sickness, morning sickness, muscle aches and pains, as well as poor circulation and arthritic pain. Its warming qualities are good to use for feelings of loneliness and winter depression, and its energizing properties make it a good aphrodisiac.

Ginger essential oil is non-toxic and non-irritant (except when used in high concentrations) but could irritate sensitive skins and can also cause photosensitivity.

In vapor therapy, it can be used to help relieve catarrh, lethargy, nausea, colds, flu, feeling of loneliness and loss of libido.

Blended Massage Oil or in the Bath

In blended massage oil or diluted in the bath, it can be used for arthritis, rheumatism, lethargy, nausea, colds and flu, muscle aches, poor circulation and digestive upsets.

Blended in a Cream

As a part of a cream or lotion it can be used for arthritis, muscle aches, rheumatism, and also to help with poor circulation and to disperse bruises.

When used with hot compresses, ginger oil can be used for arthritis, rheumatism, muscle aches and digestive upsets.

Drop on a Handkerchief

For ease of use, when applying a drop of oil to a handkerchief for quick inhalation, it can be used for nausea, morning sickness, indigestion, colds and flu and travel sickness.

Since ginger oil is strong smelling, it can overpower weaker oils, but blends well with all citrus and spicy oils such as Bergamot, Frankincense, Neroli, Rose, Sandalwood (Mysore) and Ylang-ylang.